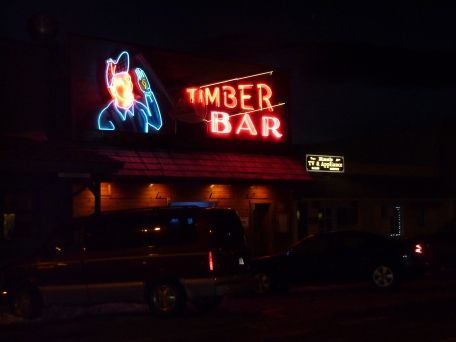 It was another cold, dark, and howling night in Little Twig, Montana.  No longer below zero, the wind had picked up again and slapped Daphne in the butt as she literally blew into the saloon.  At the end of the bar in his usual spot stood Cowboy Clay with his Chardonnay.  Carl nursed a whiskey a seat down from where Clay stood and Soot was to the right of Clay also sipping a whiskey.  One bar stool next to Carl was open and Daphne slid in and threw off her long down coat.  Claudia had already poured her a glass of  Sauvignon Blanc and set it down in front of her.  Daphne pulled out her cell phone and placed it on the bar.

Daphne:  I waiting for one more call and then I’m done for the day.

Soot:  I’m getting rid of my cell phone.  We never needed them before.  Why should we now?

Clay:  Well what happens when you get stuck in a ditch?

Soot:  Well, maybe I wouldn’t have gone anywhere where I’d get stuck with no way of telling anybody where I am.  Maybe these phones just cause people to be reckless.  What did ya think about that?

Carl:  You could be right, Soot.

Clay: I don’t know.  I think people are going to be stupid whether they’ve got a phone or not.

With that the first round of the Philosophy Club finished and it was on to the next round.

Soot:  So why doesn’t anybody stop in this town anymore?  It’s right in the middle between Billings and Bozeman.  And right on the Interstate.

Daphne (venturing a guess) : Well it’s in the middle of…well…a large state with no people in it?

Soot:  There are plenty of people in those cities and we need to have something to draw them in. You know, besides that art stuff.  Why don’t we have some events?

Carl:  My theory is that the balance is off.  Used to be when I was young, there were 9 bars and 9 churches.  Now there are 12 churches and 5 bars.  The proportion is all off.  Town doesn’t work.

Clay:  If there are so many churches, why aren’t there more good people?

Soot:  You’re right.  Why are there so many more cops if there are so many churches.  Don’t churches produce good people?

Daphne:  Are there so many more cops?

Lots of snorts, guffaws and laughter from the three men.

Clay:  When I was in high school there were two.

Daphne:  That does seem puzzling since the population is about the same.

Carl:  Before the Interstate, people stopped at Fry’s Cafe at the Charlie Russell Motel.  I bar tended there.  Made Hop, Skip and Go Nakeds and Harvey Wallbangers. It was THE place to stop between Billings and Bozeman.  In those days, you drove on the highway, saw a nice place and stopped for a drink or a snack.  The stop before here was The Four Winds and then there was a bar a few miles down in Greycliff. 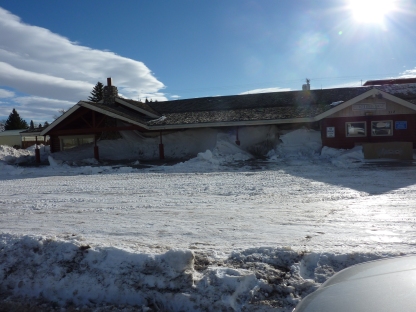 The former Charlie Russell Motel and Cafe.  Now home to the miners of the Stillwater Mine.

Daphne was incredulous:  Greycliff had a bar.  Greycliff is like two blocks long.

Carl:  Every town no matter how small had a bar/cafe.

Daphne (wistfully):  Oh, I love Irish bars.  We used to hang out at McHale’s on 29th and 8th in New York.  We’d drink there after play rehearsals and philosophize about art and politics.

Daphne:  Soot, I think it’s the Interstate then that’s the problem.    Interstates make it easy to pass a town by.  And there used to be a passenger train that came through here.  You could get off and stop at Fry’s or this saloon and then get back on another train. I just read a short story about a local gal who falls in love with a guy working on an interstate that will cut around the town and not go through it.  It will pass it by.   She’s going to marry someone who is part of wrecking her town …

Daphne looks wistfully off into the air while the three men roll their eyes.

Carl: The bar in Greycliff was owned by a couple who were always drunk.

Clay:  Mary was a little rough.

Carl:  That’s right.  She drank a lot and pounded on an old piano.

Clay:  That’ right.  There were dances there.

Carl:  Well the bar’s gone but there’s no church either.  That left the post office, but now they shut that.

Silence descends upon the bar as each patron takes a sip of beverage.  Thus ended the next round of the Philosophy Club’s musings.

Carl: Claudia, I’ll have one more for the road.

Daphne:  But not for the Interstate.

They all nodded in agreement.